Zeiss have discontinued production of the Victory HT line of rifle scopes and have released their new V8 series. For a great alternative, check out the 2.8-20X56 Victory V8 - which also has an illuminated #60 reticle - at Optics Planet and Amazon.

The Carl Zeiss Victory HT 3-12X56 is the largest rifle scope in the Victory HT flagship line for the German company. It's also the brightest rifle scope they have to keep you out in the field long after the stars have greeted the night sky. This long range rifle scope is unmatched among its siblings and cousins in the Zeiss family. You can't get better than this.

While it's still yet to get more feedback online, it's seen an unbeatable 5 star rating on every forum that has had a dedicated hunter pitch his two cents. When you pay for the best, you get the best.

But, I hear you ask, "why pick this model for review?". I ask you back, "why not?". When you're reviewing one of the best optics brands in the world, why not review the best that they have to offer from their flagship line? There was no question that this rifle scope was ever not going to be reviewed.

Granted, most people aren't willing to spend around $2700 on a rifle scope. But, for those who have experienced the "you get what you pay for" principle or hunters who want to see if all the hype about a Zeiss scope is true, they end up testifying that every penny spent was more than worth it.

Most of us hunters know what it feels like to be sick and tired of calling it a day just when the deer have come out to play and they look more like black blobs on your scope. The background resembles a muddy mess while the reticle amazingly disappears just when you need it most.

The edges of your field of view gets blurry because the sun's going down and your scope decides to too. Been there, done that. Say goodbye to those problems and never end your hunt because the sun or your scope made you. Welcome to the Q&A of the Victory HT.

What are the benefits of this scope's 56mm lens?

This Victory HT has the largest objective lens of the flagship line with just over a 62 objective bell diameter size. While this means it will not be as low profile as you'd expect from a 32mm lens, this 56mm lens is supported by a solid and robust 30mm tube body.

While some hunters think 56mm is overkill, this Victory HT rifle scope was made for exceptional low light performance when you still need to see fine detail and muscle contours for the first-shot only-shot kill zone.

The larger lens is going to allow more light in when the lights are out, and that's when you're going to see its strengths revealed. This scope is going to be the brightest scope you'll ever look through at night - period.

Zeiss says this 56mm scope has a whopping 95 percent light transmission which means you'll be out filling your tag and filling your freezer while everyone else is turning on home.

What is Schott HT glass and LotuTec?

This rifle scope has the exclusive Schott High-Transmission glass with the new and improved T coatings that gives the 56mm lens their 95 percent light gathering abilities while keeping light loss to the bare minimum.

LotuTec is Zeiss' special glass coating that works on the same principles as lotus leaves that repels and resists water, fingerprints, dust, and dirt. Nothing is going to stick or scratch these lenses whether you're in the swamp, among brush, or low in the sticks.

The Victory HT 3-12X56mm has the #60 reticle which combines nanotechnology and fiber optics to create the perfect reticle for this scope. The thicker posts of the cross hairs cover only half of the area allowing for more precision without obscuring vital sight of the target.

The reticle is in the second or rear focal plane and subtensions change relative to the target. And, just to be clear, this reticle is not a ballistic compensating reticle. We'll get to ballistics later in the review. But first, there's also a very important feature of this reticle that will be brought up in the next question.

Does this HT scope have an illuminated reticle?

Yes! This illuminated dot is one of the sexiest illuminated reticles in the optics industry yet. During normal reticle use you don't see any dot in the center of the cross hair at all. When you're ready for precise aiming with illuminated control, it'll appear perfectly in the center and will get brighter until you've found the perfect setting.

It has more in the power setting than any other illuminated dot. It also doesn't get bigger as you change zoom. It's the tiniest but purest illuminated dot that you'll find out of all the scopes in the market today. You can see how it's going to be the night and day difference during low light hours.

As an awesome design point, it works excellently for day time use too.

To use it couldn't be easier. The knob on the left side of the scope, opposite the turrets, is the illumination control. Just pull the knob out to turn it on. Rotate the dial to find the brightness setting you want to use.

If after four hours the illuminated dot hasn't been used, it'll shut itself off to preserve battery life. No exaggerating, this illuminated dot is the best I've seen on a hunting rifle scope.

Are there other models in the Victory HT line?

Remember how I said this scope doesn't offer a ballistic reticle? Well, that's because it doesn't need one. The ASV+ elevation model of the 3-12X56 Victory HT is a ballistic turret that provides bullet drop compensation with the twist of a knob.

What is ASV+ Elevation?

This is the name for a ballistic turret that provides for elevation adjustments for bullet drop compensation at preset known distances. By using the Zeiss Ballistics Calculator to set up your cartridge and scope with the right ASV/target turret ring, you'll get your holdover values for several distances, the appropriate ASV+ ring suggestion, and even a photo display of bullet trajectory over several distances.

The ASV+ elevation model comes with nine new and improved quality metal distance scale rings (and one linear scale ring) that can be interchanged, depending on cartridge, bullet drop, and distance, on the elevation turret.

The distance scales have been improved to include a larger range of bullet curves. The fine division lines provide for even more precise clicks to get the right distance for the intended trajectories. After matching your caliber and ballistics with the appropriate ring, put the ring on the turret, mark your zero and put the cap back on.

If you've not heard of a ballistic turret before, don't feel like an amateur. The advanced technology on these have only been in the making in the most recent decades. But, when you're spending this kind of money for this scope, you probably shouldn't be surprised to see ballistic turrets everywhere in this price range.

Swarovski, another world-class brand, also integrates ballistic turret technology into their high-end scopes. I'm glad to see that Zeiss has the confidence, science, and technology to compete.

Can I use the turrets with hunting gloves on?

The Victory HT has been designed with the hunter in mind. The turrets all have decent sized grooves and enough knurling to be easily used with gloves on. Furthermore, the ergonomic design of the scope allows you to comfortably reach the turrets without having to even take your eyes off your sights - a feature that hunters appreciate.

The turrets also have a lockable feature to further help the scope keep its zero, and it can also be resettable to your original zero. 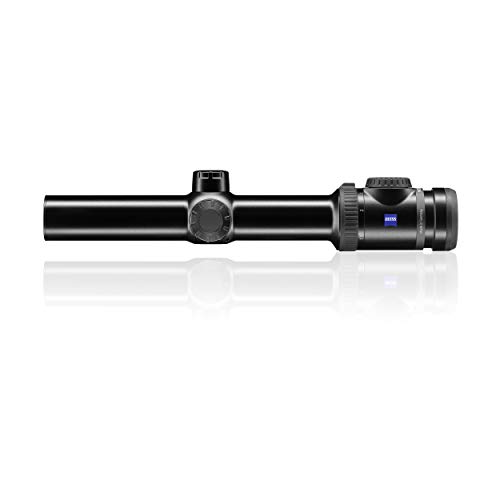 Does it have a parallax adjustment feature?

You'd think with the astronomical cost that they'd throw in an adjustable objective or side focus at least, but no, there's no external feature to adjust for parallax. Besides, it'll mean more weight in extra glass and parts on the already 21-ounce heifer. Parallax isn't a big deal with 3-12X anyway.

You'd want to see the AO or side focus on a 4-16X scope though. However, this scope is factory-set to be parallax-free at 109 yards. This exhaustive article on parallax adjustments is useful and a good read if you have the time.

According to the bull's-eye, the Zeiss Victory HT 3-12X56 rifle scope will be deadly accurate like no other scope can be. It's an incredibly sexy scope for the field. It's perfect for every aspect of shooting whether you're hunting, precision shooting for competition, or for tactical use. Of course, the price is going to be high. You don't get these perks or this kind of quality for anything less than two grand and this baby is one of our top recommendations for a scope under $3000, so that will give you an idea of how much the Victory will set you back.

If you can't afford this one, we don't blame you, most of us can't. However, Zeiss has come out with the economical Terra 3X 3-9X42 rifle scope which you can check out. It's definitely not in the same ball park as the Victory HT, but it's still a Zeiss!

For this kind of money, you could always opt for a Swaro. The Swarovski Optik Z6i 3-18X50 rifle scope is top-of-the-line quality. You won't ever have to buy another scope again if you can land yourself this Swaro. It's got swank, swagger, and sway, and oh yeah, it has the most innovative rifle scope technology too.

It's difficult to compare a Zeiss because they're the absolute best. Keep your mitts on them at all times, because a Zeiss rifle scope is definitely prone to being stolen by sticky fingers. It's so good that you might almost never want to use it. However, it would be a shame not to, a lot of tags might go unfilled if you pass up a Zeiss!

Zeiss have discontinued production of the Victory HT line of rifle scopes and have released their new V8 series. For a great alternative, check out the 2.8-20X56 Victory V8 - which also has an illuminated #60 reticle - at Optics Planet and Amazon.